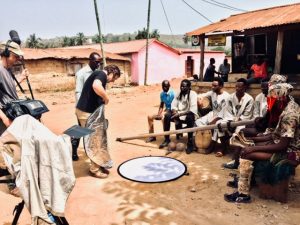 The film company SchmidtFilm from Leipzig rediscovered three of Schomburgk’s original black and white documentaries and combines his historic pictures with shootings in Africa today and interviews reflecting on Schomburgk’s ambivalent work.

The documentary film produced for ARTE and NDR will be broadcasted end of 2019.